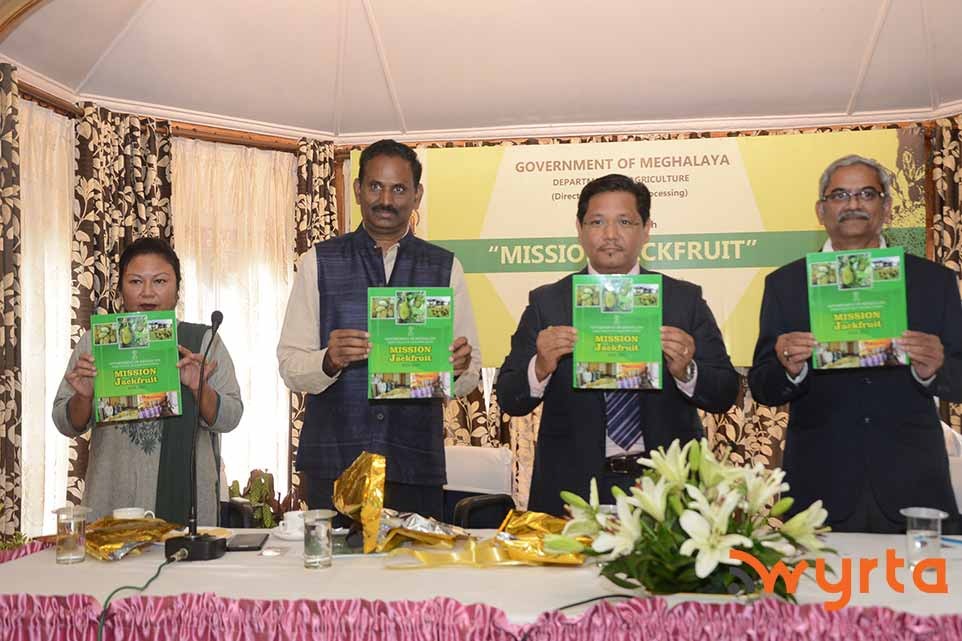 Meghalaya Chief Minister Shri Conrad K. Sangma today released the Mission Jackfruit 2018-2023 document at a function held in Hotel Pinewood, Shillong.
The Chief Minister also unveiled “Superjack”, the jackfruit mascot, which will be the brand ambassador of Mission Jackfruit across social media platforms, collaterals and merchandise and gave away certificates of excellence to Hotel Heiga VNS, Hotel Centre Point and Little Chef Café, Shillong, who were adjudged winners of the Jackfruit Cuisine Tasting event, held on the 11th August 2018.

The draft Mission Jackfruit document was first released by the Chief Minister for public and stakeholders’ comments on the 5th July 2018 on the occasion of the Jackfruit Festival held in Shillong which attracted a number of very constructive comments and suggestions and which have been incorporated into the final mission document released today.

A number of pre launch activities centred on Jackfruit had been undertaken by the State Government through the Meghalaya Institute of Entrepreneurship which included the training of more than 100 farmers, 2 state level and 2 regional workshops, district level jackfruit festivals, a soft launch of Jack of the Day dishes and a Jackfruit Cuisine Tasting event, all of which have received very enthusiastic responses from stakeholders and civil society.

Through the mission the Government will make an investment of about 67.08 crores over a 5 year period of which 40.07 crores will be the central share with the rest being borne by the State Government.

The Mission will be implemented by the newly created Directorate of Food Processing which will bring in synergies and collaborations with other institutions and programs of both the state and central Governments especially the MoFPI, ICAR, MIDH, SFAC and with upcoming externally aided programmes of the World Bank and the KfW.

The function was attended by around 100 eminent personalities and was marked by the introduction of Jaffee, or Jackfruit Coffee, roasted and brewed by Smoky Falls Tribe, jackfruit cookies and pastries by Lam Lynti bakery and ended with a Jackfruit themed lunch catered by the Indian Institute of Hotel Management Catering & Applied Nutrition (IIHM), Mawdiangdiang, Hotel Heiga VNS, Little Chef Café and Hotel Centre Point.